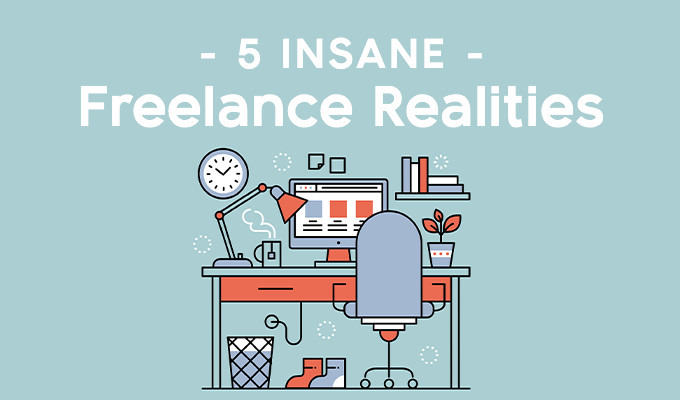 Being a designer is great, but being a freelance designer? That's even better. Well, except for the lack of sleep, sink-or-swim mentality and the constant fear of not being able to pay your bills. I suppose as long as you're not too attached to eating you'll be fine.
OK, it's not all bad, but there are some pretty crazy things that happen when you go freelance, and it's not always obvious what they are. That's why I've taken some of these concepts and compiled them into a list for all to enjoy.And to illustrate my points, I've decided to use GIFs exclusively from one of the best shows on television, Futurama.

Let's compare a regular 9-5 position with one like you'd have as a freelance designer. As a 9-5er, you'll collect a paycheck every two weeks, no matter how well or poorly you perform. You might get a promotion at some point, which brings in more money and all that, and you likely have vacation days that will cover you if you ever have to call in sick or take a day or 12 off. As long as you do your job and your company has a place for you, you're employed. Nothing like having some money to burn, right?

Not so much as a freelance designer.
Here's something I learned early on: you don't get paid unless you work. See, as a 9-5er, you can coast along on your good looks one day if you're just feeling a bit off, and chances are you'll still be fine. But as a freelancer, you have to work, or nobody will pay you. The relationship between your income and work product is directly related. On top of that, checks don't come in regularly. You may have to track down payments from clients. There may be months where you don't collect any cash because you're working on big projects, and then other months where you're rolling in dough. Feast or famine, as they say.

(Yeah, that's right, I just reminded you of Jurassic Bark. Go ahead and cry now if you want.)
How do you get around all of that? Well one trick that I did was keep a record of my income using a spreadsheet, and then I pay myself a regular amount every week. That payment amount is less than I make, so, in theory, I'll continue stacking cash until I have a gap in my schedule, then I have the reserve funds to continue paying myself in the lull times. It's not perfect, but it's something.
Oh, and there are taxes. Quarterly, at the end of the year, or whenever. You're gonna pay them, and if you don't, well ...

No matter how hard you try, there is just no 9-5 in this gig, particularly when you're starting out.

In the beginning, it's all about making sure you have enough money to pay the rent. So it starts with taking a client phone calls after hours, or answering a few emails around midnight because it's no big deal. But soon that becomes the standard, and your clients begin to expect that you'll get back to them sooner rather than later, no matter the time. So you get into this panic mode where you have to work constantly for fear of losing the clients, things start to slide. Like showering regularly. And laundry.

Now yes, you can start to establish guidelines from the start, and you could do the 9-5 thing efficiently. But it takes a tremendous amount of discipline to keep it up, and if you're the only one bringing home the bacon, you have to question whether or not it's a wise decision.
Seriously, you might not believe me, but someday you might find yourself having a conversation with a freelancer buddy about when each of you showered last, and one of you won't remember.

Some clients think that the best way to get design work done is to hire a freelancer, because they're cheaper. But fact is, you've got to cover all of your own expenses, so there's no way you can send someone a bill for $15/hr. And since the guys who want a bargain are coming to you first, no matter what you charge, it's almost always too much. "You're too expensive," they say. "Highway robbery!" they shout.

But then there are the clients who think the opposite. You're too cheap. Why would you charge so little for such a valuable commodity? You have a skill, right? You should be charging me through the nose for what you can do. And yet, they still have crazy requests that just don't make sense.

You've got to roll with it. After all, clients are your company's lifeblood. Yay.

You're An Accountant, a Bill Collector, a Janitor ...

Yeah so this is the best part of it all. You start off as a freelance designer thinking that you'll spend your time making cool logos and taking on killer projects. Truth is, that's maybe 20% of your time. What do you do with the rest of it?
Well your accounting, for one. Gotta make sure your books are up to date, or else the tax man will come for you. Your computer is down? Looks like you're the IT person too, so get out your multimeter to do some testing. Office dirty? Yeah, you're the janitor. Oh, and you've got to do some marketing, too. Otherwise, who is going to find new clients for you?

Yes, it's not easy going freelance, because you have to do the jobs of 10 people all by yourself, and it can become overwhelming. But ...

It's The Most Rewarding Thing You'll Ever Do

That's right, even with all of those drawbacks, the most important part is that it's the best job ever. There's nothing like the feeling you get when you pull in your first client, or have your first successful sale. Or that time when your work gets recognized by your peers. Or when you get so successful that you start to take on so much work that you start to think about opening up your own studio and hiring a staff, making yourself a full-fledged business. Yeah, there's nothing quite like that feeling of success. Nothing.

So yeah, there's a mammoth amount of work in front of you if this is the path you choose, but don't worry, it gets better. There is light at the end of the tunnel, and when you get there, you'll be so much happier that you pulled the trigger on this career.
Now if you'll excuse me, I have to go watch my favorite TV show.